Well, it's the winter of 203 for my dwarves.  The fortress population nearly doubled in the spring, and with a few births and a few more migrants arriving in the fall, there will probably be nobles showing up in the spring.  I'm not entirely ready for them.  I've also noticed dwarves sleeping in the beds I've laid out to use as hospital beds, so the bedroom situation needs work.
One problem is that even though I've dug out some new bedroom areas, they are still cluttered with stone.  I've hollowed out two otherwise useless areas on the path into the mountain.  One is holding stone, and the other useful garbage.  Even with the extra stone storage, I don't have room to store all my rock.  I'm going to have to work on that.
I've got quite a bit of ore, but I'm low on charcoal to do anything with it.  I'll have to expand my tree cutting and charcoal burning.  One good thing that happened is that I've got an artifact leather shield.  I'm sure that will be useful if I can get someone to wear it.  I did have one dwarf die of melancholy because I didn't have any turtle shell when he wanted to make an artifact.  I've traded for some, so hopefully I won't have to start fishing.  I've got more food than I really need from farming already.
Posted by Eric at 4:31 PM No comments:

Puttering Around the House

I had a great time last weekend in Dayton.  Chip and I got some useful stuff done around his house, and I got to see my youngest niece Karina.  I'm still quite proud of helping restore Chip's fridge to bachelor status. (see the virtual band post)  However, I'm looking forward to staying at home this weekend.
I'm planning on doing a fair amount of cooking this weekend.  I saw a gumbo recipe on the cooking channel that I have wanted to try for a long time, so I think I'll finally get the ingredients to make that.
I also got a new Linux box up and running recently.  I switched desks between the Linux box and my windows box recently too.  Now that those things are done, I want to get my computer room all cleaned up and organized.  There was no good way to make progress on that while the room was full of boxes of computer parts.
Posted by Eric at 7:53 PM No comments:

I played a little DF last week, but didn't get my blog entry in.  It is now early winter of the year 202.  The dwarves of Darkbrew the Eyes of Elders have accomplished quite a bit since last I wrote about them.
They constructed a waterwheel, and used it to power gears underground which will eventually power a series of millstones.  They also finished construction of a well, which in addition to providing water to the dwarves, not that they would drink any of it unless they were out of booze or wounded, it makes a much better meeting hall than a tiny dining room.
New migrants arrived in the fall of 202 to push the fortress population to 35.  I appointed a dwarf to serve as sheriff of the growing community.  She's is currently cranky about not having furnished quarters or an office, but she'll get over it.
Finally, the fortress has it's first artifact and legendary crafter.  I've got an artifact quality rock idol, and a legendary stone crafter.  However, not having enough crafters to fully specialize yet, my legendary stone worker is currently weaving thread into cloth.
Posted by Eric at 8:16 PM No comments: 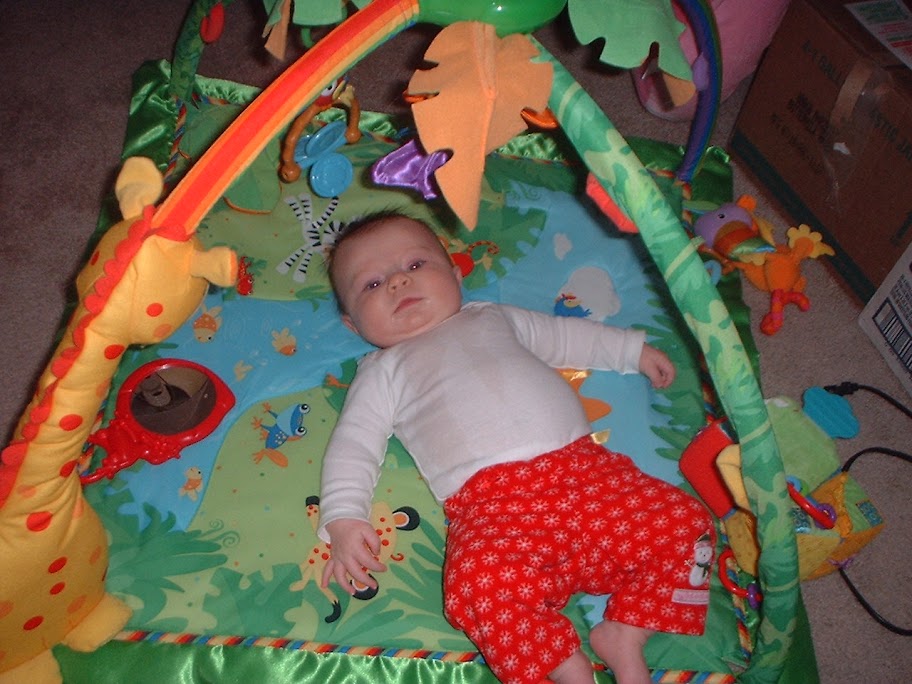 While I was in Dayton this weekend, Men without Comma, the Band Chip and I created in Rock Band, experienced a severe setback.  We decided to record a DVD in the game rock band, which gave us the opportunity to gain extra fans if we had 5 star performances for every song we played at a certain venue.  We did well, scoring 21 stars on 5 songs, but that cost us over 100,000 fans.  We lost the right to play in many venues, and had to rebuild our fan base.  We were able to do that, and got our band over 700 stars for all shows performed.  Chip and I were also able to get though some of the easiest songs in the game on expert mode, which felt like an accomplishment.
In other events in Dayton, Chip and I managed to get his fridge back to bachelor status.  It now contains pickles, beer, and condiments.  I also visited with Dan, Michele, and Karina.  I got her laughing at one point by making a do-do-doo sound for her.  On the 3rd syllable, she got really amused.  However, after a nap that sound was no longer funny.  Despite having her laughing (or as close as a 3-month-old gets to laughing) I couldn't get any good pictures of her smiling.  The one above is as good as I did.
I had a good time on my trip, but this weekend I'm looking forward to a nice relaxing time of doing nothing but puttering around my house.
Posted by Eric at 8:01 PM No comments:

I'm addicted to this ASCII game

Well, after a winter of brewing and digging, I'm playing one more season to try to get some migrants to arrive.  At least the digging has given me enough room to clean up some of the loose stone cluttering up the place.  The goal for the spring is to get some pig tails growing and set up a loom for weaving the pig tail thread into cloth.  Ack!  Pig tails grow in the spring.  Maybe some elves will show up to trade and I can get some booze off of them, otherwise my dwarves are going to have to live with drinking fermented mushrooms.
One of the things I did in the winter was to set up a row of traps leading into the fortress.  They caught an intruder, a "vicious" dear.  Yes, my traps killed bambi.  I built a butcher's shop and a tanning shop too.  My dwarves are making some bambi leather.
Dear lord.  I got my immigrants, 19 of them.  I've got to figure out what to do with them now.  I've got them smelting iron and burning coal, turning trees into crossbow bolts.  I made plenty of crafts, but no elven traders showed up.  I also cut a few gems.  At least I'll be able to brew some pig tails come summer, which has now hit.  I'm going to stop the game then post this.
Posted by Eric at 5:43 PM No comments: 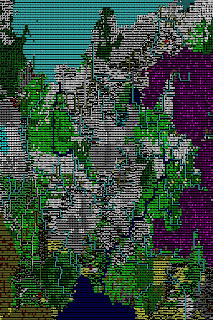 I learned about this game in a list of free games from PC Gamer magazine.  It's the most ambitious city builder type game I've ever seen, and the graphics are all ASCII art.  I decided that I would start blogging about my world for two reasons.
Without the blog, I tend to play for way too long in a single sitting.  Also, without the blog, you have nothing to show for you efforts.
I generated a world called The Gilded Axe, and I'm going to build my first fort at a river coming out of the mountains into a forest.  That should give me a good mixtrue of stone and wood to start with.  I selected a dwarven society called The Treaty of Obeisance as my home civilization because I liked the name.  And I gave a dwarf named Zulban some social skills so the game should make her the leader of my expidition.
One of my goals for this game is not to build aboveground structures and keep everything below the surface.  I was going to customize my group name, but the randomly assigned one fits perfectly.  My dwarves will be know as The Banner of Depths.  Their fortress will be known as Darkbrew, the Eyes of Elders.
So I'm going to embark and see what I can get done in a single season.  The basic goals are to get a spot for the trade depot dug out, underground farming started, and a baracks built.  When I get a look at my map, I have an immediate decision to make on where to the entrance to my underground fortress.  There is a stream at the north end of the map, and a large plateau at the southern end.  I would really like to dig down into the rock plateau, but because trees and water are useful, I decite to start at the northern end of the map.
I got my spring goals accomplished, plus I got a baracks built.  I'm going to go ahead and play another season since this first one goes quickly.  I want to get my initial set of bedrooms built, and get my initial set of workshops laid out in a good pattern.  I want A Carpenter, mason, mechanic and wood burner on the industry side.   I also want to get all my storage underground.
Well, I didn't get a wood burnder built in the summer.  I should probably produce a few rock crafts as trade goods this fall.  Hopefully I get a few imigrants.  If I don't, I probably need to put a miner onto farming duty.  The bedrooms are dug out, but not fully furnished, so I want to get that done this fall.  I need to get my bookkeeper an office too.
Well, I didn't get any imigrants, so that limits my options for expanding things.  I went on into winter, where I think my goals are to burn a little wood into charcoal, harvest more trees to make up for what I've been using, and dig out my metal ores.  This game is so addicting.  I'm going to let it run while I'm not doing anything fancy and cook some dinner.
Posted by Eric at 1:23 PM No comments:

Well, I helped hang drywall and Michele and Robert's yesterday, and I'm sore today.  We made a lot of progress though, the walls are looking pretty good.  After we were done working, Michele, Blake, Taylor and I had a good time watching The Princess Bride.  Blake is quite a bit like Fred Savage's character who doesn't like all the kissy stuff.
Posted by Eric at 1:12 PM No comments:

Well, we had a big snow and ice storm here in Louisville about 10 days ago.  I worked from home on Tuesday, but I lost power that night.  My power came back on just before the superbowl.  Fortunately we had a warm weekend.  It was 38 degrees in my house when I woke up on Saturday morning.
So now that I've covered snow and power, you may wonder why fish are in the title of this update.  Well, my poor fish didn't survive the chilly conditions in my house.  They hung in there for a while, and if someone had mentioned this technique to me sooner I might have been able to save them by putting sealed containers of hot water in the tank to keep the water warm.  Fish have survived for hundreds of millions of years without electricity, but my fish seem to be pretty reliant on it.
Posted by Eric at 2:41 PM No comments: