I saw this movie a few days ago at The Village 8, a cheap theater in Louisville. I should have known bad things were going on when a movie that opened on Christmas day was already in the cheap theater on Jan 19th. However, I was already there, and Village 8 gives you free refills on a large soda.

The good: Scarlett Johansson is absolutely drool inducingly gorgeous as Silken Floss. Her acting may have even been the best in the movie, or it could have just been that when everyone else is overacting and saying ridiculous things, playing a deadpan straight faced character makes you look good in comparison. Also, all the Sin City style is there. That's it, end of the good list.

I suppose Eva Mendez is hot too, but her character is so annoying you probably won't care. Another thing about her character is that the name is apparently Sand Serif from the printed material, but sometimes the other characters call her San Serif and other times Sand. Couldn't the director have at least made them say her name consistently one way or the other?

There is too much wrong with the movie to make an exhaustive listing, but despite all that, I was entertained. The problem was that it was in a MST3K or USA Up All Night kind of way. When the movie made me laugh, I was definately laughing at it, not with it.
Posted by Eric at 8:12 AM No comments: 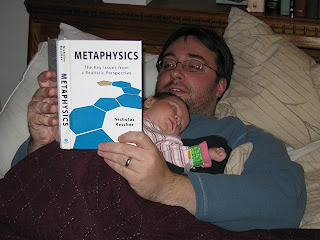 Well, I'm down to a half day of vacation for my 2nd year at SVS, and I have to say that this has been a good relaxing one. I've caught up some on my movie and DVD watching. I need to do more, but if I can watch the Dark Knight today I'll be able to check one more off my list. I also got some stuff done around my house that I had been meaning to do for a while. I'm probably going to head back to Louisville sometime tomorrow so I can get a little more done on my last day before heading back to work.

I drove up to Dayton and saw my niece Karina on Wednesday this week. She looks a lot bigger than when I saw her just a few weeks ago at Christmas. She's also a lot more interactive. She reacts to music and rhythms by smiling. She also smiled when I recited the alphabet rhyme from Edward Gory's The Gashly Crumb Tinies. I'm trying to be a good gothic influence on my youngest niece. I wonder if she would like Poe's The Raven as well? Maybe I shouldn't point this blog out to Dan and Michele, they might not want a young goth on their hands. On the other hand, a gothic influence can't be any worse than metaphysics for an infant, can it?

Chip and I played some Rock Band for the first time in a long time as well. We got our band, Men without Comma, up over 500 stars for the gigs we've played, but we lost some fans on a punk song with brutal fast drumming. To add insult to injury, you can't even practice the song in the practice settings!
Posted by Eric at 7:40 AM No comments:

If anyone watched the HBO series True Blood, these are the novels that series was based on. There are enough differences that reading ahead in the books isn't going to spoil the next season of the show, even if you do pick up a few spoilers along the way.

Dead Until Dark - The first book, introduces the main characters of Sookie and Bill. Sookie is a telepathic bar tender and Bill is a vampire. Ironically, they're the perfect couple because Sookie can't read the minds of Vampires. Probably the biggest difference from the show to the book is that the show (probably wisely) excluded a vampire Elvis, who now goes by the name of Bubba. Could you blame a vampire working in the morgue from trying to save his hero? Too bad all the drugs in Elvis' system turned him into a dimwit who prefers cat blood to other forms of nourishment.

Living Dead in Dallas & Club Dead - Books two and three respectively. These books start to bring in many of the side characters who were immediatly presented in the HBO series. These were some of my Christmas presants, and I read through them in a hurry. Maybe I'm a sucker for vampire stories, but I enjoyed both of these a great deal and plan on picking up more of these books when I go spend the borders card I got for my birthday.

For the curious, this link leads to the books: http://www.amazon.com/Dead-Until-Southern-Vampire-Mysteries/dp/0441015972

And this to the HBO series: http://www.hbo.com/trueblood/
Posted by Eric at 6:05 PM No comments:

I apparantly am lousy at blogging regullarly

I could blame it on the holidays I suppose, or working a lot. However, I haven't been doing anything else on a regular weekly basis either. I could also blame it on my hot water heater being out for a week before christmas, not having hot water is certainly style cramping. I had a good holliday and good birthday, hosted my Dad's side of the family Christmas party almost two weeks ago, and have read all the books I got for Christmas. I must get into a better pattern with my weekly routine and monthly cleaning.

Since this was a rather lame update, I'm going to get a book review up.
Posted by Eric at 5:57 PM No comments: