Warning: This blog post is entirely about Path of Exile.  Stop reading now if you're not interested in that.

Grivas is my first PoE character.  As such, I got to the middle of the 2nd playthrough and determinded that he sucked.  Worse than that, he sucked and couldn't be fixed without spending a ton of currency on respect points.  So I had stopped playing him.  The problem with early characters in this game is that you don't have a good plan for your path through the skill tree, you just pick up stuff that sounds cool and is close by.  You also don't get enough life.  How badly I had messed up my first character was somewhat obscured by finding a 5 linked chest armor.  I knew I had problems when I couldn't get through the Vaal pyramid without being crushed by the monsters inside.

However, now with a free respec from release 1.2, I have restored Grivas to a damaging and durable Duelist.  With a sword in each hand he hits quickly and he hits hard.  He breezed through the Vaal temple and took out the Vaal Oversoul without any difficulty.  While I'm very happy to have my first character in a playable state again, I do feel a bit cheezy that I got an achievement for using 4 keystone skills in a single build without working my way up to that organically. 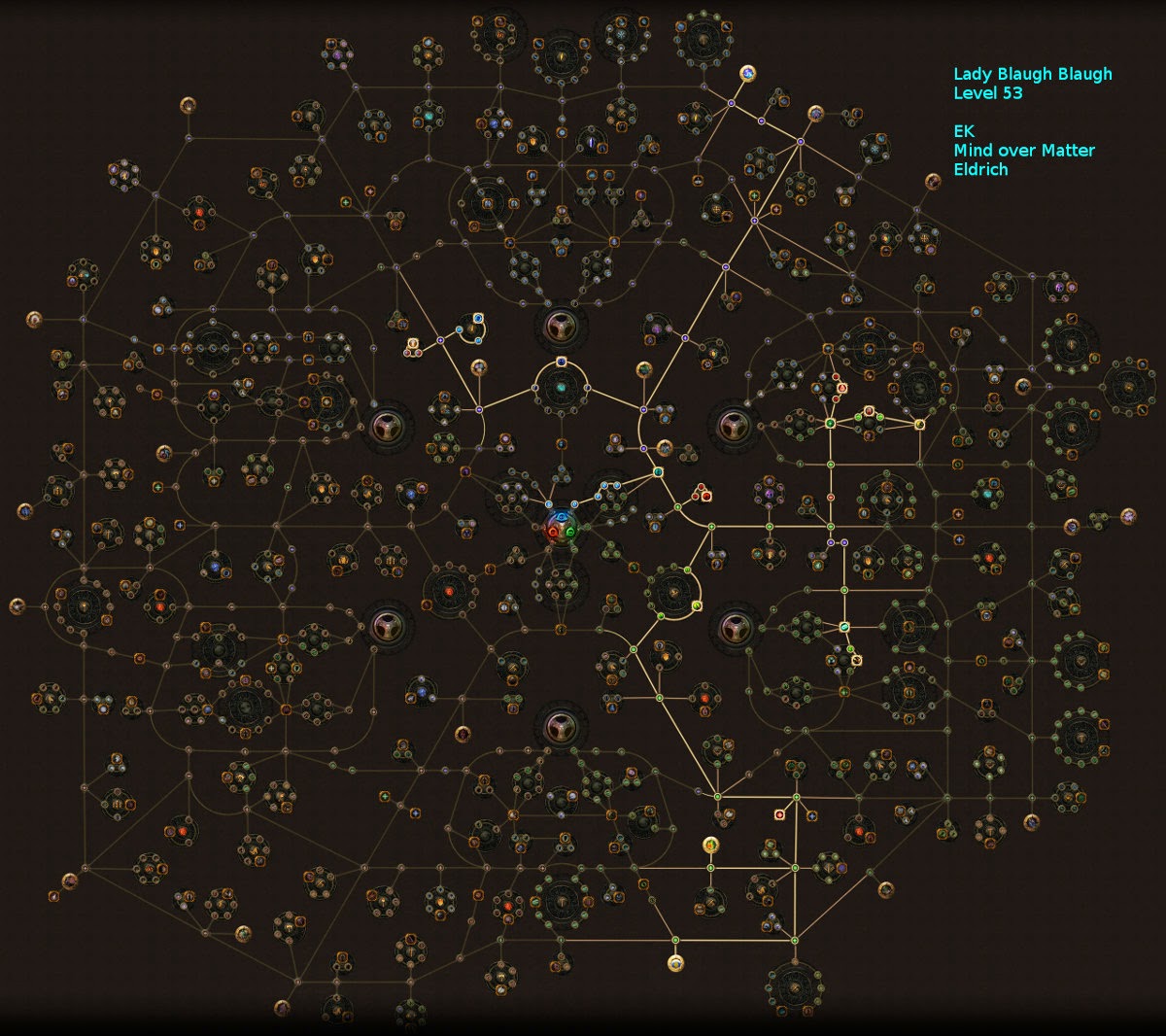 I'm going to call this character Lady Blabla in my blog post, but I had to spell her name funny to achieve uniqueness in the game.  This was another mess of unfocused character design.  The fact that I got her through a hardcore league and over level 50 is a sign of how powerful a skill spectral throw is. With a free respec in hand, I wanted to do something different.  So I tried ZiggyD's Mind over Matter, Ethereal Knives Scion.

Even someone who doesn't play this game will probably be able to tell that this skill tree stretches from one edge of the graph to the other while most of the other trees in this blog post are more compact. That's because I need to travel quite a distance to pick up both Eldrich Battery for a huge mana pool and Mind over Matter which uses mana to negate 30% of incoming damage, as long as you have mana available.

Now, unlike Grivas, who is basically a fixed version of his original build and had a full set of gems to use upon respeccing, Lady Blabla had nothing useful for her respec.  The only thing that hasn't made this a completely painful process of working a new set of skill gems to a useful level is something I was using merely for distracting monsters in the original build, Flame Totem.  It's fire is considered a projectile, and I've got lots of projectile speed now to give Ethereal Knives range.  That skill gem spits out fire like some sort of insane flame thrower now.  It's enough to make me want to run a dedicated flame totem build.

Servant of a Burning Fire 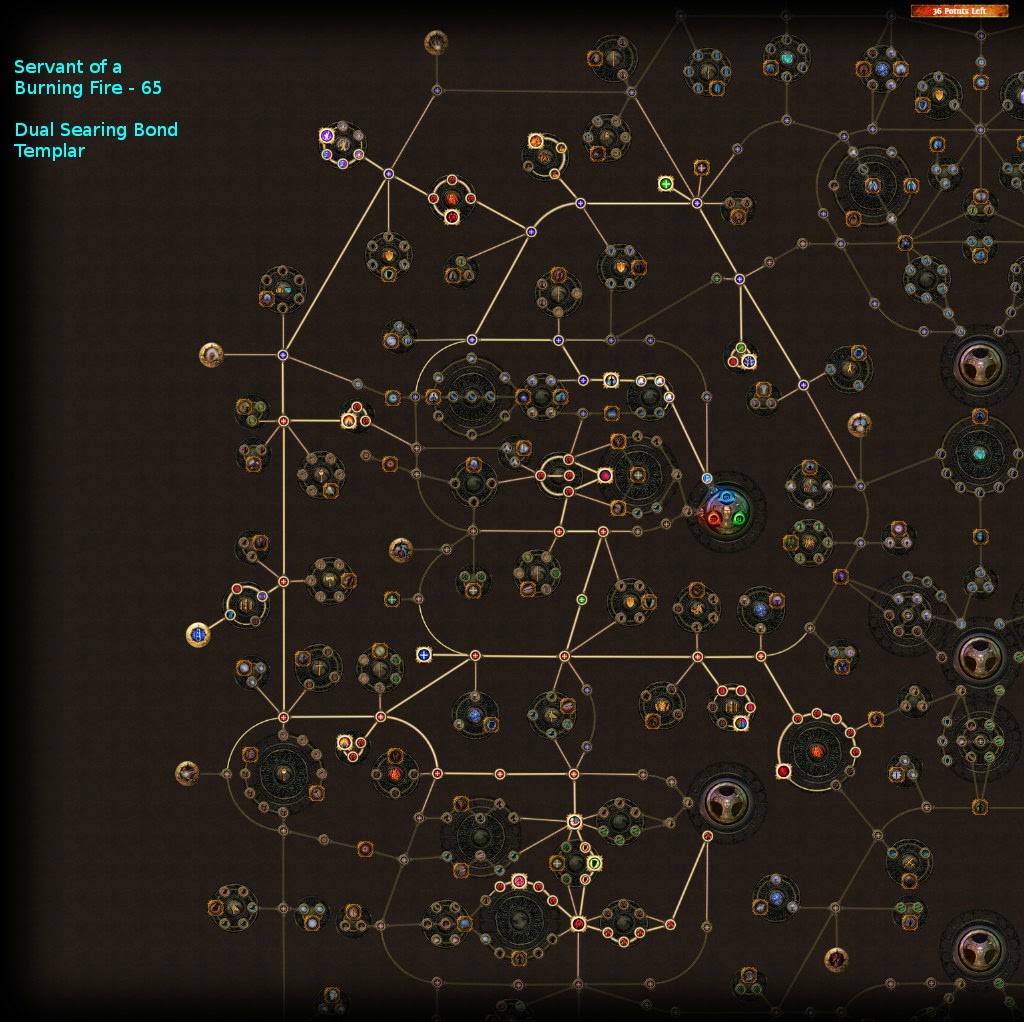 Servant of a Burning Fire had to respec because of skill changes, but he plays like he always has.  He's a dual Searing Bond Templar and always has been.  I did however make a mistake and forget to pick up Elemental Equlibrium which makes Searing Bond do even more damage that normal because it is fire damage, but it doesn't "hit" anything.  So chill enemies a bit and then they burn more easily next.  Even with forgetting to pick that up when respeccing and Searing Bond getting an 18% damage nerf across the board, this is by far my strongest character.

Servant of a Frozen Fire 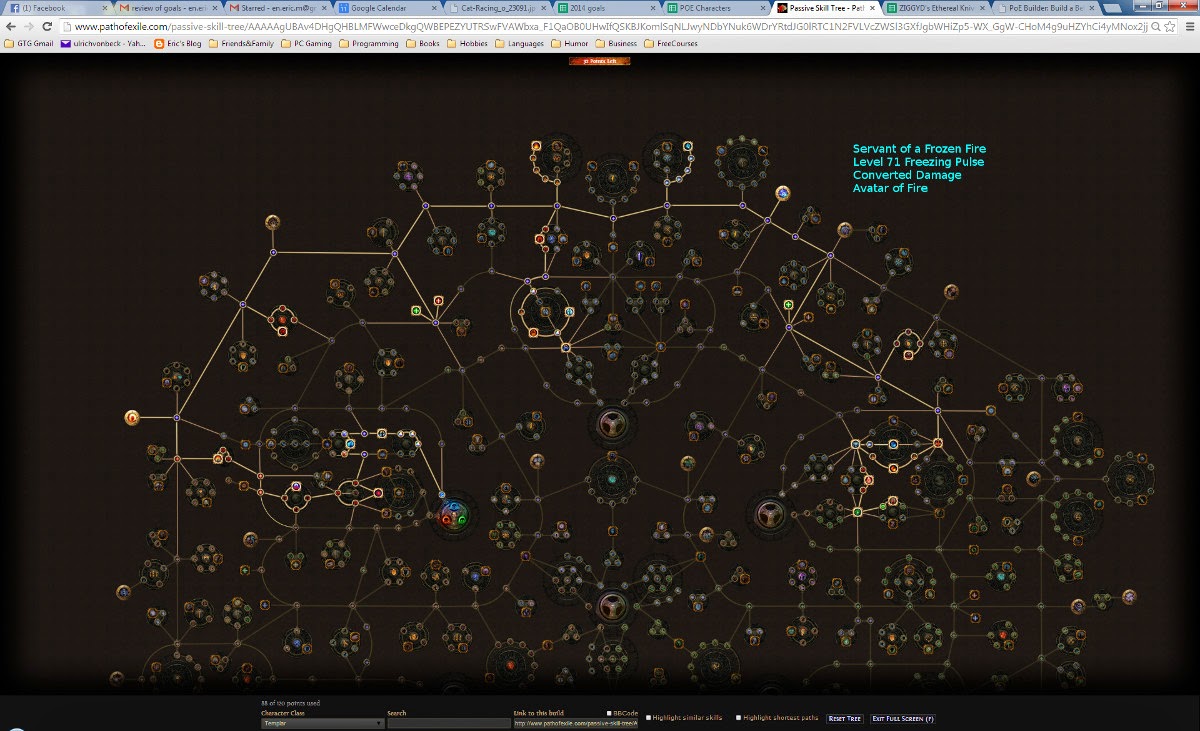 This character is a bit like Grivas in that the respec helped him become the character I had in mind.  He is also a bit like Lady Blabla in that his skills chosen go from one edge of the graph to the other.  This is more an effort to pick up all the spell-casting nodes from the Templar, the Witch, and the Shadow than the need to pick up distant Keystones.  However, Eldrich Battery is still a fair bit away from Avatar of Fire.

This character had been one that I was going to stop playing because the build, even when it finally started coming together, just wasn't very strong.  It was durable enough to survive maps, but the offensive potential was so feeble it took a long time to clear them.  Now the character isn't as durable, but I can work on that with gear and what I pick up as I continue to level.  Granted, leveling is going to be a slow process since this character is now level 71, but it's still doable as I've got a decently sized map pool.

This is my summoner witch.  She plays largely the same after the respec, but I did inadvertently make a change.  I dropped some mana regeneration & aura nodes, but I picked up an extra minion quantity cluster of skills without realizing it.  I've respeced a bit further after the free respec to correct this, but I feel like I have an absolute army of undead following me now.  Even though I can't support them at full power for long with the Arc gem any longer, the sheer number of skeletons and zombies available make up for that.  I'll be working on mana regen as I level this character and improve her gear.  Unlike Servant of a Frozen Fire, Yarmilla is only level 68, so just getting her level to equal his would help quite a bit.

PS - The other reason I'm posting these images is that in the past I had to compromise on what I captured from the grap spanning builds.  I just realize that if you use the zoom on the browser to zoom out sufficiently, you can actually capture the entire grid in a single screen capture.  Being able to show those in their entirety got me interested in updating them.